Below is a copy of a film review I produced for a university module on, Analysing Auteurs, this assignment was given a first class mark. 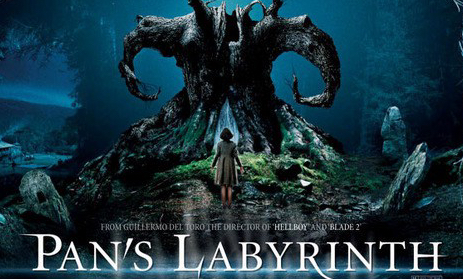 Pan’s Labyrinth (2006), originally known as El Laberinto del Faun (The Labyrinth of the Faun), is a Spanish war and fantasy film directed by Guillermo Del Toro and set during the end of the Spanish Civil War in 1944. Although the war has ended, there is still an ongoing battle between the fascists and the resistance. Vidal, the captain of the fascists (who is tremendously portrayed by actor Sergi Lopez), continues to hunt the opposition, as he believes the Fascists have won the war. A young intelligent girl who is soon to be heroine named Ofelia (Ivana Baquero) is traveling with her heavily pregnant mother, Carmen (Ariadna Gil), to meet her new step-father Vidal (Bond, 2007, Website). The story begins when Ofelia is thrown into a world of unknown after a strange encounter with a mystical creature, the Faun, who explains Ofelia is not who she thinks she is and that she must carry out a series of tasks to prove she is worthy of this unknown world.

There are many foreshadowing elements within Del Toro’s Pan’s Labyrinth (2006). An example is a scene where Captain Vidal is sat around a banquet with a priest and his associated fascist soldiers who are revealed by a panning shot. It could be suggested that the banquet scene is foreshadowing Ofelia’s next trial of the quest, the task to retrieve a ritual dagger from the pale man’s lair. Once in the lair, which strongly resembles a church, Ofelia is presented with the sight of a large banquet filled with untouched food and at the head of the table sits a lifeless monster, the pale man. The monster is sat in the same position as Vidal perhaps connoting the correlation of greed and evil that both Vidal and the pale man monster possess.

Religious elements can be seen throughout Pan’s Labyrinth (Del Toro, 2006) although this may not come as a surprise as many other Del Toro films, such as Hellboy (Del Toro, 2004), have strong religious themes and examples of Catholic symbolism. Again, this is not so astonishing when looking into Del Toro’s upbringing with Catholicism (IMDb, n.d). The pale man for example, is shown to be an evil creature that devours children, perhaps referring to the Greek God Cronus who ate his own children out of fear that his offspring would overthrow him (Gill, 2016). Which could be seen as a metaphor relating the resistance to the child and the fascists to the monster, as they fear the resistance will over throw them.

The use of a low angle shot during this scene also reveals a pile of old shoes in the corner of the room and establishes the size of the room; the pile of shoes suggest the pale man monster has consumed many victims and is perhaps a direct reference to the current state the ‘real’ world is in. For example, the shoes may symbolise the items left behind by victims of concentration camps during World War Two. The art on the walls may reflect religious paintings and the pale man’s thirst for children, who are often portrayed as innocent, and the destruction of that innocence being corrupted and destroyed in reality.  The mise-en-scene throughout the film reflects gothic and expressionist styles, for instance the old dark buildings, the uncanny forest and the mythical creatures, delivering a sense of uneasiness to the viewer as they join Ofelia on her quest (Braudy & Cohen, 2009, p.837).

Del Toro’s combining of fantasy world and reality feels convincing and authentic through his use of transitions that flow smoothly, blending the worlds together and giving the impression that they co-exist. For example, rather than using sharp cuts when editing, instead he uses a focus shot, whenever Ofelia is traveling from one world to another, creating an effortless movement through the film. The joining of two worlds is also featured in his other films such as Hellboy (Del Toro, 2004), which uses portals as the method of leading the protagonist to a different world.

Del Toro’s Pan’s Labyrinth (2006) represents the stereotypical, ideological and hegemonic values of a Marxist society, through its fascist characters (Hayward, 2000, p.192-193). Captain Vidal for example, is portrayed as a blood thirsty sociopath that exploits others who are vulnerable or juxtapose his politics. This exploit and inequality could be seen as a representation of the victims during post-civil war Spain as it reflects the harsh reality the public faced. Del Toro’s representation and Ivana Baquero’s portrayal of Ofelia is arguably the most important factor within the film as it truly does depict youth fighting for its future and understanding the fact it must sacrifice itself for it to win. The dark twisted fantasy-war film definitely employs both death, war and fairy-tale together in a fantastical thriller. The film itself is one vast juxtaposition, that contrasts good and evil, fantasy and reality, and finally innocence and corruption.